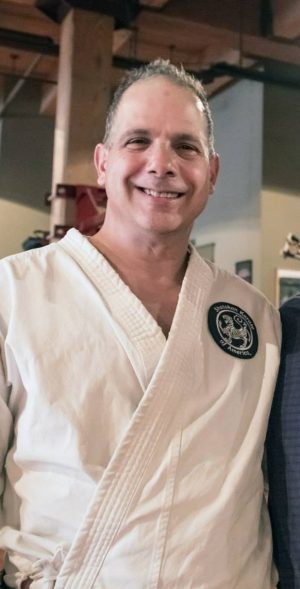 Before starting to practice karate-dō in February 1976 as a high school sophomore in Kansas City, David Altman was an endurance athlete and training to break the world record in jumping rope. He met Jon Beltram and asked if karate would be a good cross training method. He completed his first special training a year later and met SKA founder Tsutomu Ohshima when he visited to give Dan (black belt) test. He had no idea who he was, but what he saw was something special.

By 1980, David had made Shodan and moved to Seattle, Washington to study Biomechanics in college. His focus in this field of evaluating human movements was working with disabilities. He also began to train regularly with Ron Thom, now Godan and SKA President Emeritus. David spent winters practicing with Ron Thom and summers practicing with Jon Beltram. It was during this time that David’s endurance training came in handy when he promised to make his way back to Kansas City for summer special training. He rode his racing cycle for eight days over 1600 miles and made it in time and completed the special training. Relatedly, David also went on to complete multiple Ironman Triathlons.

David continued to bounce back and forth between Seattle and Kansas City until 1988, when he returned to the midwest to look for work. He found a job as a “helper of the people” with the State of Nebraska in Lincoln, working with disabled people and assistive technologies to help them accomplish their work. He dedicated his life to helping people with disabilities and has volunteered time for humanitarian work. He has traveled ten times to developing countries, taking as many medical supplies as he could, to help people with wheelchairs and providing medical care for both children and adults with disabilities. He has said his motivation is the compassion and healing he wants to give people.

For years, David would travel to Kansas City and back to practice with Jon Beltram, Mike Lyon, Carl Johnson, and friends. In 1990, David was encouraged by Mike Lyon to ask about opening a dojo in Lincoln. Ohshima Sensei gave David his permission. He began working with the University of Nebraska – Lincoln and officially began teaching classes in the summer of 1994. Since then he has been working to pass on what he learned from Ohshima Sensei.

What is critical to one’s practice is to train hard, honestly and unselfishly, to throw oneself into training whole-heartedly, and to do one’s best. Practicing in this manner has developed my mentality in never giving up and always putting forth my very best effort. As Master Funakoshi said, “We practice so long as we breath.”

During college, one of David’s projects was studying the physiological effects of warming up, stretching, and cooling down. For many years now, he has focused especially on studying Junbi Undo, warming up and stretching. He has integrated what he has learned about liberation and freeing the body of mental and physical blockages from his personal yoga practice. He emphasizes:

“Junbi Undo is not just something we do before practice — it is our practice. It allows us to move freely, and kinesthetically be aware of how we connect our breath, our mind, and our body as one.”

As an Amazon Associate, SKA earns from qualifying purchases